Mariquita de Boissière
August 5, 2022
As well as a brand, Swickie is building her name as a multi-discplinary artist, from AI and digital art and landscape photography and portraits.
Tags
Digital art
AI art
Photography
BAYC
Share

Swickie was always a creative, but as a web2 marketer always felt constrained. eb3 gave her the ability to build a brand on her own terms. She speaks to Mariquita de Boissière about building #TeamKiki with her Bored Ape and discovering herself as a multi-disciplinary artist in her own right.

Swickie, as she is known within web3, is a force to be reckoned with. Defining herself simply as “a regular person”, Swickie exudes a warmth that others reserve only for good friends. Chatting to her for the first time offers a glimpse into how she has endeared herself to the many NFT and web3 communities that she is a part of, from sports to arts to OG collections.

Two words come to mind to describe Swickie when exploring her artistic output and brand work within web3: prolific and passionate across all kinds of topics. “People mostly see me as an artist but I think a lot of people see me as a connector in-between spaces and in between worlds within web3.” Laughing, she adds, “I exist in this weird little section of a Venn diagram. But that's where I've always wanted to be.”

In one of the many overlapping circles that make up Swickie’s ‘Venn diagram’ is #TeamKiki, the community that she and her partner, Peter Fang, have built around Bored Ape #5273. "The thing that put me on the map probably is the ape", she shares. It was Bored Ape Yacht Club’s (BAYC) innovation to transfer intellectual property (IP) rights to holders that sparked Swickie’s imagination, initiating a journey that would see Kiki feature in a special edition of Punks Comic and form collaborations with creators ranging from streetwear designer Dee Calvero to celebrated Los Angeles-based Street artist, Rich Uno. “I came from branding,” Swickie explained, adding that she was energised by the challenge that came with the opportunity, “it was like, ‘let’s see how good at branding I really am.”

While Swickie’s work with boutique brands, combined with her experience in film and television production, no doubt gave her an edge in positioning Kiki, it also gave her a unique perspective on how collective ownership on the blockchain is changing the fundamental chemistry of how people collaborate. "Working in web2 branding, it was very clear to me that people weren't really listening to each other. There was not a lot of autonomy for the clients or for creative people to go out and do whatever it is that they want to do with their marketing." By contrast, “what I love about web3 projects is how you're buying into a project which gives other people ownership so that they also care what happens to it.”

As a Latina, the personal implications of having direct access to collectors and potential collaborators are not lost on Swickie. To her, it’s a question of flattening power dynamics. “The number one thing in web3 is how it allows so many people who were never able to access wealth and opportunities before to do so.” She adds, “it's crazy to me to look at what my life was ten years ago and look at it right now and just be like, we put up with so much because there was no other option.” One word that Swickie uses again and again to describe what she sees happening in web3 is 'empowerment'. “Back in web2, I was really timid and afraid to lose my job situation. And here it's like, ‘you're not the boss of me. I'm paving my way. And your bad take is not going to derail my plans’.”

At the heart of it, Swickie’s web3 story is one of unfolding rediscovery and reclamation; of her identity as a businesswoman and a Latina but also as an artist, a dreamer and a storyteller. As one might expect, Swickie’s art is as eclectic as her interests. Spanning photography, digital painting, AI art, mixed media and animation, her collections weave through styles as diverse as SoCal neon pop, 90s glitch art, and architectural photography.

While she now embraces her identity as an artist, it hasn’t always been this way. Swickie describes how she had “put to bed” the idea of being an artist in her own right to instead focus her career on managing other creators. It wasn’t until she began tentatively releasing her own art as NFTs – and saw her work snapped up by notable collectors – that something began to click.

Moonbeam Collection, a series of twenty digitally rendered astralscapes that capture visions from lucid dreams, was the first complete collection that Swickie minted on the blockchain. It sold out. California Chronicles, a series of photos of the people and places that shaped her during road trips across lesser visited areas of California, followed suit. As appetite for Swickie’s work grew, she was forced to confront her artistic talent.

“I realised that drawing out my dreams really helped me figure out who I am.”

But there was something deeper going on too. Amongst the vast expanse of the Californian desert, Swickie began to explore themes of reflection and resolution. “It was a lot of learning about myself, because there was like nothing to look at, you know? There's just a loneliness.” Her photos are a carefully-selected combination of significant places and people who made life-long impressions, all experiences that compelled her to take a portrait to commemorate that moment in time.

Bringing the mystical depths of her dreams to life and sharing vulnerable moments captured on camera provided answers to the deep questions that Swickie had carried with her for years. “I came into this place trying to find out who I am, in the most literal and figurative sense that you could possibly think of. One of the questions I had was, ‘am I even an artist’? Once I sold my first two pieces, I realised that drawing out my dreams really helped me figure out who I am.”

More recently, Swickie has been exploring storytelling through AI art and “bringing NFTs irl” through her Space Dust project. She has big plans for Kiki who was recently signed to the web3-native agency, DYOR Management. “It's accelerating the plans that I have because I've got a team now instead of just me.” Enthusiastically, she adds, “there's also another thing, but I can't tell you yet because I haven't announced it. But that particular thing is super exciting to me because it's something that we did on our own.” There's more to come.

As someone who has personally undergone deep transformation through web3-facilitated community and art, Swickie is clear about how important this moment is for cultivating accessibility and onboarding historically marginalised communities; "to women, I would say don't be afraid. There is support here. You can find people who are cool and will be your allies.” In a serious tone, she emphasises, “And it's important for people to be allies. If you can be, you should be. At all times."

“Back in web2, I was really timid and afraid to lose my job situation. And here it's like, ‘you're not the boss of me’.” 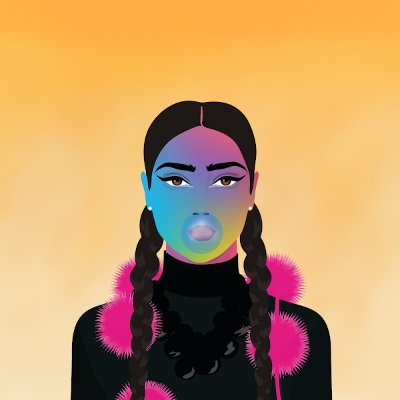 “NFTs revolutionised art. They're truly the artistic avant-garde of this century. They changed my life” — Anibal Argañaraz