Ola Kalejaye
November 9, 2022
“I love the possibility that people of colour have more opportunities available here than ever before.”
Tags
NFT
USA
North America
Share

Actress. Chef. Event Host. Web3 Advisor. Manouschka Guerrier has lived many professional lives. Having missed the boat to web2, she speaks to Ola Kalejaye about why she's diving deep into web3 and how she found her niche.

One might expect that someone who cut their teeth as a TV food personality who later worked as a celebrity chef, Manouschka Guerrier must have carried some lifelong passion for cooking. That couldn’t be further from the case.

“If you ask my family, they're completely shocked. I tried to make Chinese fried rice once and my brother likes to tell everybody that it was the grossest thing he ever had in his life!” The path that saw Manouschka become a renowned in the food industry started with a mild case of homesickness. Pursuing an acting career in 1990s Los Angeles with no Haitian restaurants, she called on her grandmother to share some of her favorite recipes from home.

“Through that process, I discovered that I have a super palate. I go somewhere and I can identify all the ingredients in the dish. I realised, ‘okay, I can start cooking more’. After a while, it became my therapy. There’s something about making from scratch, feeding people, and them enjoying it. I loved the way that made me feel.”

It was her blog Single Serving that landed Manouschka her role on The Private Chefs of Beverly Hills. The show itself was not a good experience – “I did not think that Black women in reality TV were portrayed very well,” she says – but it did lead to the high-profile gigs that followed, with periods spent as a private chef for the likes of Drake, Selena Gomez, and Ariana Grande.

Despite the importance of her blog in the early days, her growing work with private clients prevented Manouschka from diving further into being a content creator just as the web2 social media wave began to encroach upon her business. “Not only did the pandemic decimate my industry, but so did social media, because TikTok chefs and Instagram chefs are willing to do my work for little to no money to be able to say that they worked for this client or that client.”

As 2020 marked a paradigm shift in her industry, Manouschka suddenly found herself with more time on her hands. She decided to spend part of it learning more about that “magic internet money” her niece had first told her about back in 2015. “Now I had the time to learn about it, and while I'm learning, I stumbled into NFT spaces on Clubhouse. At first, I was of course judging it like I judged Vine and Instagram and everything else. But I gave it a shot and I absolutely fell in love with it.”

After finding success as a creator on television, she had missed the move to social media. Manouschka is ensuring that she is at the forefront of the internet’s new shift to creator communities enabled by web3. “From then, it just seemed to me that it was important to really focus on being a part of building web3, because I missed the boat on web2, and I saw what that did.”

When her introduction to Web3 finally came, it was hardly a major ask for the ever-flexible Manouschka to shift her attention once more. “I think this is probably my sixth career, but web3 really fits my wheelhouse because I love connecting people, I love art, artistry, and artists. And I love the possibility that people of colour have more opportunities available here than ever before because we're studying what's going to happen. I thought, ‘let me just put the pots and pans down for a little bit and learn about this'.”

While the passion to get involved in Web3 was there, how she could best participate was not immediately obvious. Of course, there was a thought to experiment with NFTs, but for a creator whose artform centers on taste and smell, digital art was not an easy pivot to execute. Nonetheless, she continued showing up and making connections. Before long, her role as a facilitator and connector revealed its merits.

“I saw that artists were not really good at selling themselves and talking about their story, when it was really artists' stories that were selling. But I've always championed people, so it evolved into that. I would speak up on behalf of artists. I really got to meet and understand a lot of people in the space. So it was easy for me to connect people.”

“I started educating people on how to have an IRL event.”

It speaks to the energy and excitement that spread throughout the industry over the past couple of years that Manouschka was so inspired to participate that her network turned into professional opportunities. Over time, “connecting people just organically” evolved into advisory and consulting work in hospitality to help blue-chip NFT communities evolve their events beyond “glorified frat parties”.

Attending web3 conferences across the USA, like NFT.NYC, ETH Denver, and Art Basel in Miami, Manouschka saw how events put on by newly-minted, inexperienced NFT teams compared to the celebrity clientele to which she was used to. “I'm like, are you kidding? There's no food here, we have to buy our own drinks, and wait, now you want us to buy merch? I could have sold this damn NFT for $30,000 and this is how you treat me? So I started educating people on how to have an IRL event because these are really, really important.”

The first team to take note of importance and hire Manouschka - and, as she fondly remembers, the first time she received any eth in payment - was the CyberKongz NFT project. Her main task? Having an eight-foot ape made during Thanksgiving weekend for Art Basel 2021 in late November, ten days before a CyberKongz’ luncheon. Other events followed, including four more at NFT.NYC and others at ETH Denver.

Of all of the work Manouschka has undertaken since entering the web3 industry, however, nothing speaks to her intentions and vision for the future as much as A Great Day in Harlem… Web3 Edition, staking their contribution to Black cultural history.

It was in Harlem, in 1958, where 57 jazz pioneers, from Thelonious Monk to Dizzy Gillespie, met at a brownstone to record their role in elevating jazz through a photograph shot by Art Kane for Esquire magazine. Forty years later, 177 hip-hop artists met on the same spot for a shot published by XXL magazine to mark the Black community’s continued contributions to contemporary culture.

“It was the morale boost that my people needed.”

Shot by Gordon Parks, it is one of many homages inspired by the 1958 photograph, known as A Great Day in Harlem, but was the only one that was held at the same spot. Manouschka was determined to celebrate today’s pioneering Black crypto artists in the same way.

“At the time that [hip-hop] photo was taken, you're looking at people like, like Eric B and Rakim, and Mos Def – they weren't huge stars, they were just scratching on the surface, which I feel like we're doing now with web3.”

“It was important to focus on being a part of building web3, because I missed the boat on web2, and I saw what that did.” 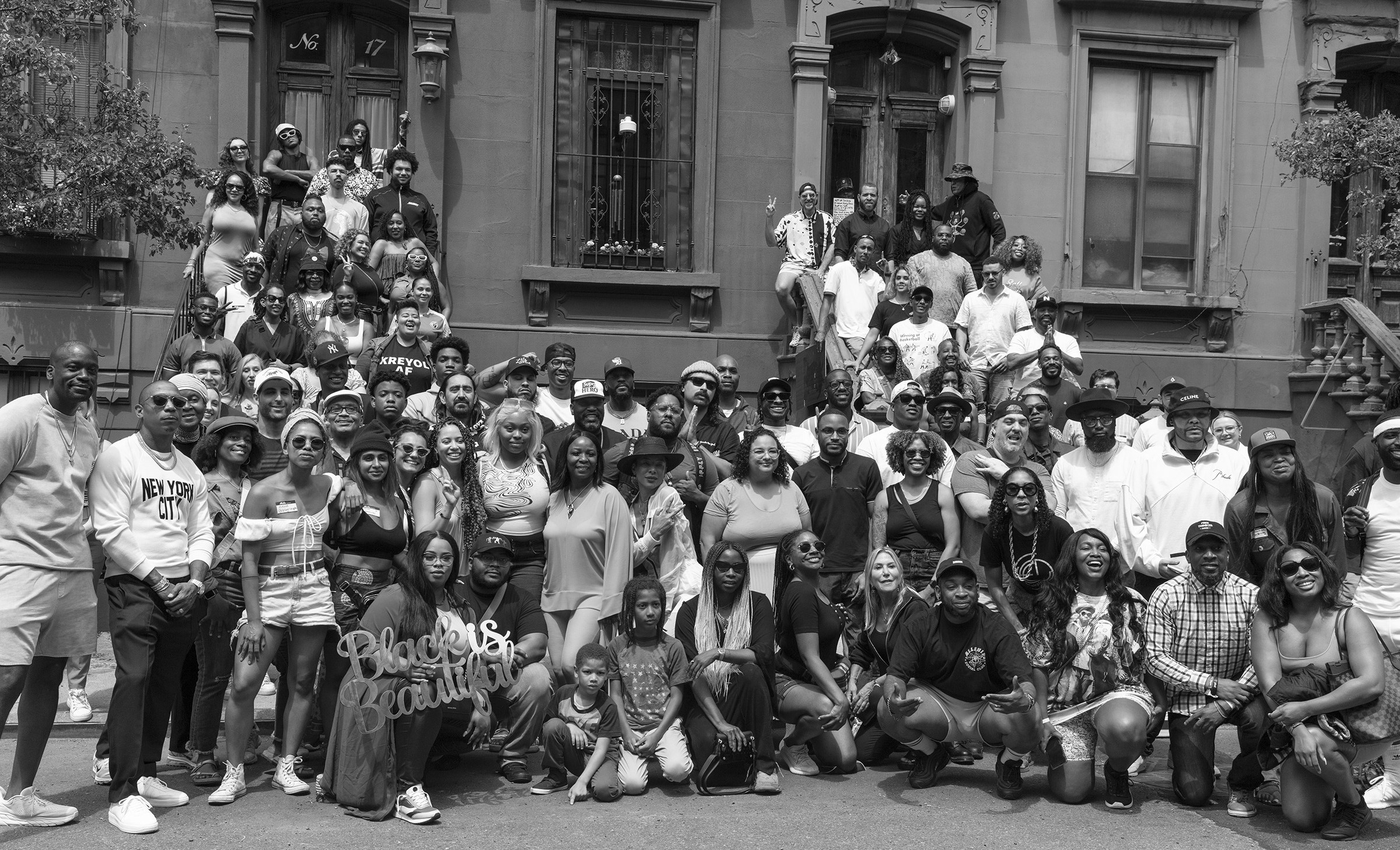 Manouschka reached out to Keith Grossman, President at TIME Magazine and an active thought leader in web3, to make it happen. “He actually declined because he felt that Esquire should do it, since they did it before [in 1958]. I said ‘Well, no, because XXL did it for hip-hop, and I don't see Esquire hosting rooms every day, I see you.”

“I wasn't going to take a 'no'. It was bigger than me. It was something that was really, really important. It was the morale boost that my people needed.” After lobbying other members of the TIME team, Grossman eventually changed his mind, supporting Manouschka in organising an event that welcomed around 100 people. Brandon “Ruff Draft” Ruffin had the honour of photographing the 89 attendees, including some of the icons from the 1998 hip-hop shoot.

Above all else, Manouschka and her peers see the potential of the blockchain as a long-needed equaliser for artists who have historically had less access to the resources that are instrumental to a sustainable career. Beyond that, the Web3 Day in Harlem photo speaks to how the ambitions of the Black Web3 community are even further reaching than those of their predecessors, certainly when it comes to intra-community equity and representation.

“The difference between the jazz photo and the hip-hop photo, [compared to] the Web3 photo, was how many Black women were in it. It was predominantly Black women. We're finally in a space where Black women are being heard. We have a lot more resources than ever before. Web3 is the platform that we've been waiting for.” 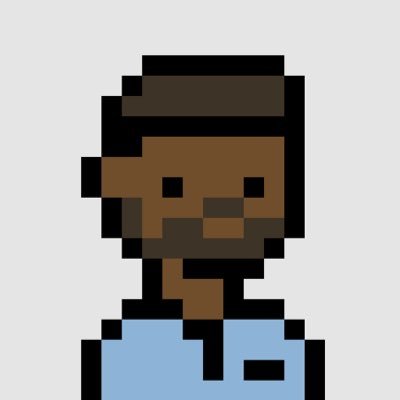