How Ethnology is immortalising stories of the ancients on-chain

For centuries, local communities around the world have told stories and legends about their culture. Many are forgotten to the sands of time, and lost. Ethnology is building a community dedicated to sustaining those stories and immortalising the totems of cultural groups from around the world. Micah Ray explores their new series and speaks to founders Pablo Garcia and Matt Ashcroft about the arduous process of hand-drawing a 10k PFP collection.

When it comes to matters of crypto and the blockchain, there’s very little truth to the phrase, "those who can't do, teach.” Times have changed since George Bernard Shaw made this assertion in his 1903 drama series, Man and Superman, because in the early days of web3, those who can’t do, may eventually learn, and those who can teach often do it all.

For architect and design educator Pablo Garcia, learning and teaching are intrinsically linked. “I've always loved creating art and design work that utilises technology,” he says. An Associate Professor at the School of the Art Institute of Chicago, he has found a multidisciplinary ecosystem to earn a living, instruct others, and satisfy his curiosities that drive his creative pursuits. Drawing upon his talents as an illustrator and the shared interests of his collaborative team, Ethnology is an NFT project inspired by cultures all over the world to explore new stories and mythologies and inspire art that sustains them on-chain.

There are 10,000 original characters in Gods and Demons, the second Ethnology series. Gods and Demons illustrates the world's religions, myths, and legends as artistic symbols that have been remixed to communicate interpretations and imaginings new and old. In doing so, Gods and Demons is an aesthetic interpretation of syncretism, where integrating discrete traditions and the joining of different belief systems — like theology and religion — encourages unity with an inclusive perspective of other faiths.

Generative art collectibles often utilise the many visual aspects of a character, shuffle them all in different combinations, and produce thousands of unique NFTs in the process. It’s like playing a slot machine and making a work of art from the set of images that pop up. Each one of those visual aspects, traits, have been coded and scripted to randomly combine and align with several other traits 10,000 times to make 10,000 original NFTs.

“It’s a dialogue and conversation; it was a mind-bending exercise to sit down and draw all these parts.”

The artwork representing each NFT isn’t entirely unlike the others, yet is altogether different, with its own unique combination of computer-assembled assets. To create thousands of combinations, Pablo drew hundreds of different traits by hand onto acetate. Like any generative art project, there is always the potential for misalignment of traits and undesired results, whilst some combinations are unexpected yet happy accidents. The entire process is as visual as it is technical. “I love the idea of mixing; setting the parameters while the computer tries to figure it out,” Pablo effuses, adding “it’s a dialogue and conversation; a collaboration with the computer. It was a mind-bending exercise to sit down and draw all these parts.”

The head of each character has eyes, a nose, and a mouth — plus hands, which could be holding something. “Zooming in and seeing the way things blend; there’s a lot of beauty in the transition and gradients between different traits coming together. It’s like you’re at a mixing board, but you’re not actually making the music directly. It’s a beautiful orchestration.”

Unlike the visual style of the first Ethnology series, the Gods and Demons collection looks vintage; like old tarot cards with a rustic aesthetic. When viewed together, Gods and Demons leads you on an artful journey through our world’s history of tales and lore; visually distinguishing these collectibles from almost every other generative art collection of its kind.

“I'm an experienced artist, yet there were so many things I did not know going into this.”

Matt Ashcroft, co-founder of the Ethnology series, is a sustainability expert and the engineer who writes the algorithmic code to make Ethnology NFTs. “It was a big learning curve going into series two,” he explains. “The first time we were researching generative art collections, the only mainstream examples were Punks and Apes — there wasn’t a lot of information about how these different assets came together into combinations.” It quickly became clear that Matt would have to code the programme himself; with few experts to follow, he would have to figure it out on his own.

For an appreciation of the tremendous amount of time and focused attention to detail this process requires, Pablo worked on his drawings for about two months before rendering his artwork into digital image files in Photoshop. Then, he listed each visual asset on a spreadsheet and catalogued them.

It took about two weeks of pre-production to tweak the code and make adjustments to the image files as various combinations were generated, reset, and rerun. Generating tests throughout the process is important because it provides an opportunity to inspect the results to identify improvements upon how the interchangeable traits combine. “It’s a back and forth,” Pablo explains.

Matt wrote the code to make the assets into metaphorical marbles, and wrote a separate script to apply the combinations in Photoshop, layering the assets together as each NFT is designed. “We have some assets that only appear twice, so we came pretty close to missing out on some traits appearing in the collection,” Matt says; the perceived value of these rare NFTs is often much higher than collectibles appearing with more common traits.

With a global history of mythologies and religions to consider, Pablo consulted a demonologist for insight about his use of ancient imagery and symbolism. “Being the academic that I am, the graphic research we performed, along with my research with Matt about what makes great output files, gave me a lot more confidence,” Pablo explains.

Begun by Pablo and Matt, Ethnology now comprises five individuals. Weesh and Grayson Coblentz have joined the team as developers, whilst andy8052, founder of Tessera, the fractional NFT ownership platform, has joined as an advisor. The team has used Tessera to fractionalise NFTs from other collections amongst their holders and has plans to make it a larger part of the roadmap, forming a community to promote art inspired by global cultures and mythologies.

The team have organised residency programmes for web2 artists to produce a series of collections as NFTs, helping them become crypto literate while eliminating economic barriers that may otherwise discourage those from marginalised communities joining the space. For Pablo, this is a major part of the vision. “If I can turn Ethnology into a sustainable patronage for another generation of artists, that would be amazing.”

“We have some assets that only appear twice, so we came pretty close to missing out on some traits appearing in the collection” 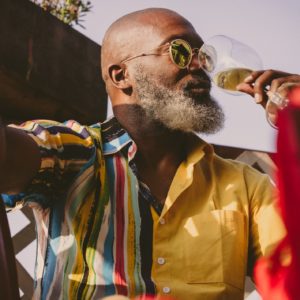 LA-based Micah Ray, whose blockchain moniker is skidrowcrypto, writes human stories about the creator’s journey: arts & culture, entrepreneurship, and technological innovation. His features are honest, authentic, and timeless, with an engaging perspective on crypto lifestyle and community, utilising his talents as a photographer and filmmaker.

“I think the work that stands out in web3 are those unique, fearless voices that finally have a place to shine” — Brandon Mighty